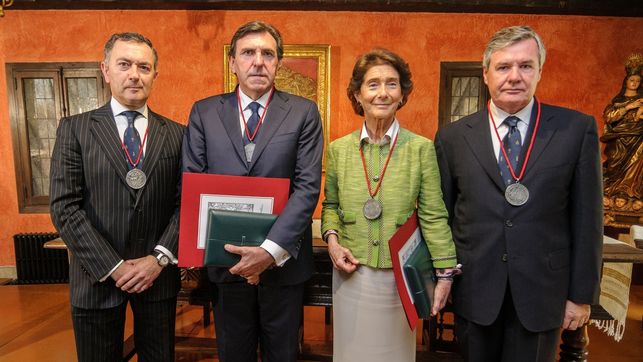 The Chamber of Commerce, Industry and Navigation of Bilbao distinguishes Jon Azua, nominating him Consul of Bilbao.

The proclamation formal act of new Consuls of Bilbao held on Friday, June 20, at the Basque Museum – Euskal Museoa of the city. Previously, in the Church of San Antón, the new Consuls have been honored with an honour aurresku.

The Chamber of Commerce is the heir of the ancient Consulate of Bilbao, created in 1512 as highest authority of the Estuary and the Port of Bilbao and its economic activities, and as such, deserves the recognition of personalities who have distinguished themselves by their commitment to the development of the city and its people. This year, the Chamber has distinguished with this appointment the President of EnovatingLab, Jon Azua, Paloma O’Shea, President of the Albéniz Fundation and leading cultural patron, and Jorge Sendagorta, President of the industrial group Sener.

The recognition of the Chamber comes to highlight the commitment of new Consuls with the development of the city in their personal and professional career. As it has stood in the celebration, the mission of Consuls is “carrying the name of Bilbao with pride all over the world, spreading the virtues of work, honesty and hospitality of the people of Bilbao, and all its activities are directed at further aggrandizement and material and spiritual prosperity of Bilbao and its people”.